It’s well understood that Obama’s true motivations were masked by his partner in crime:

…the monolithic Deep State, which heralded Obama as the next Coming of the Messiah. Those Deep Staters in government, along with their media, Hollywood and Big Tech confederates, did everything possible to protect Obama from scrutiny.

It’s interesting how the Obama moniker ‘Manchurian Marxist Moslem’ has become so prophetic.  Some folks are just now figuring out his methods and motivations:

They [Democrat party] found their ideal stealth candidate, Barack Obama.  Not only was he, beneath the façade of glibness and conviviality, a fellow Marxist/socialist, but more importantly, he was able to take advantage of decades of inculcated racial guilt among the populace… Barack Obama and his henchmen deliberately fanned the flames of race and identity politics to further divide the populace and foment riots that would dramatically enhance the power of the central government.

You have to understand that Obama lives, eats, and breathes political manipulation.  That is his expertise and it is how he has operated all of his life.  While the mainstream media would have you believe that he is the Messiah, in reality almost all of his political machinations are borderline unethical (in true Al Capone/Chicago style).

Now we are starting to see more and more of the obvious scandals hatched by Obama come to light.  Most recently, the former Director of National Intelligence, James Clapper has come out with clear statements about Obama’s scandalous  and scheming maneuvers:

The effects of the Manchurian Marxist Moslem just don’t seem to go away.  His Machiavellian touch lingers on just for our ‘enjoyment’.  In the latest Obama scandal (after his presidency has expired?) at the National Archives, it appears that the administration of the ‘anointed one’ expunged numerous records that were required by law to be stored at the federal agency:

Lipscomb wrote that “the accumulation of recent congressional testimony has made it clear that the Obama administration itself engaged in the wholesale destruction and ‘loss’ of tens of thousands of government records covered under the act as well as the intentional evasion of the government records recording system by engaging in private email exchanges.”

“So far, former President Obama, former Secretary of State Hillary Clinton, former Attorney General Lynch and several EPA officials have been named as offenders. The IRS suffered record ‘losses’ as well….the gap in electronic records appears to be a lot bigger, particularly when it comes to Clinton, to Lynch and to the IRS, each of which saw major scandals during the Obama presidency. This could be massive, particularly given that the avoidance of the gaze of the National Archives appears to be totally deliberate. In many ways, the story here is the wholesale destruction of the documents — although quite frankly, bigger scandals could have been hidden within the data. Well, if there is anything in which Obama excels, it’s certainly in the area of playing attack politics against anyone he considers his enemy while simultaneously insulating himself from culpability.  The current investigations by the Department of Justice Inspector General is bound to reveal how the Manchurian Marxist Moslem with his Mafia-style Masterly Manipulated the Mainstream Media (say that three times fast).  There is a reason that the self-appointed Messiah has been keeping a low profile:

As more facts are uncovered about the lengths to which former FBI Director James Comey, his then-Deputy Director Andrew McCabe and a half dozen other pro-Hillary Clinton bureau insiders went to protect the Democratic nominee in her email scandal, the least discussed element is Obama’s role in the affair. But former Attorney General Michael Mukasey and former U.S. Attorney Andrew McCarthy make persuasive cases that protecting Obama in the Clinton email scandal was key to the FBI’s clearly bungled investigation.

In other words, preserving Obama’s “plausible deniability” was priority number one.

A good summary of the scandals and motivation behind the alleged Obama/Clinton criminal behavior:

Remember, in the FISA-gate scandal such likely widespread criminal behavior was predicated on two premises: 1) certainty of an easy Clinton victory, after which the miscreants would be not only excused but probably rewarded for their zeal; 2) progressive hubris in which our supposedly moral betters felt it their right, indeed their duty, to use unethical and even unlawful means for the “greater good” — to achieve their self-described moral ends of stopping the crude and reactionary Trump.

Some useful commentary from Sebastian Gorka:

Yet somehow under President Obama, our highest law enforcement and intelligence agencies were subverted to become weapons of political warfare.

As additional details of Obamagate unravel, a clear fact pattern has emerged. From Fast & Furious; to the IRS and its targeting of conservative groups; to the unmasking scandal; and the weaponizing of the Department of Justice and FBI to unlawfully spy on an American citizen, the Obama administration repeatedly abused its power.

Our intelligence agencies — the most powerful in the world — disregarded the constitutional protections afforded to Americans for nothing more than political expediency.

Source: Dr. Sebastian Gorka: “Watergate was a minor event in comparison” to #Obamagate

Are you surprised?  Or was it inevitable?

A message reportedly from corrupt FBI lovers and former Mueller investigators implicates former President Barack Obama as being involved in the Obamagate scandal.

The evidence is slowly revealed to the public:

The current internal efforts in the middle of a campaign to weaponize the FBI and DOJ are something new. And it illustrates a larger effort of the prior administration to warp FBI investigations of Hillary Clinton’s unauthorized and illegal email server and other purported improper behavior, as well as efforts of Obama-administration officials to improperly request unmasking of improperly surveilled Americans for improperly political purposes. These efforts come on top of previous attempts to politicize the IRS in order to oppose perceived political opponents and to monitor journalists reporting stories deemed unfavorable to the administration. Finally, unlike past administration scandals, when the press posed as custodians of the public interest and demanded transparency from government agencies, this time around the media are arguing for secrecy and suppression of documents, and are unconcerned with likely violations of the civil liberties of American citizens by overzealous federal officials likely breaking the law.

Victor Davis Hanson reminds us that it was Obama — expecting a Hillary victory — that fostered the many scandals:

We sometimes forget that Barack Obama, not candidate Hillary Clinton, was president when the FBI conducted the lax investigation of the email scandal, when Loretta Lynch outsourced her prosecutorial prerogatives to James Comey, when the FBI trafficked with the Clinton-funded Fusion GPS dossier, when various DOJ and FBI lawyers requested FISA-approved surveillance largely on the basis of a fraudulent document, and when administration officials unmasked and leaked the names of American citizens.

This is a decent summary of what’s behind the Obamagate scandal:

Suppose what many are now suspecting is completely true — that the FBI, or parts of it, exonerated Hillary Clinton and her cohorts with a mock investigation, attempted to swing our presidential election against Donald Trump and then continued to undermine the new administration after they had won with illegitimate claims of Russian collusion orchestrated by sleazy political lowlifes?

Watergate, Teapot Dome, Iran-Contra… it would appear that none of these can hold a candle to those perpetrated by the Obama acolytes.

Source: What Do We Do About the FBI?

That’s why the smart ones used to refer to Obama as the Manchurian Marxist Moslem:

Barack Obama will no doubt be chronicled, among other things, as the first anti-American president. No wonder; he’s the product of an educational system that has become increasingly radical and anti-American with each passing decade, and his mother was a stereotypical leftist anthropologist with a passion for the Third World.

Obamagate is coming back again:

Sen. Rand Paul, R-Ky., argued Thursday that senior Obama administration officials might be guilty of trying to keep President Trump from getting elected last November.”Time to investigate high ranking Obama government officials who might have colluded to prevent the election of @realDonaldTrump! This could be WORSE than Watergate!” Paul tweeted Thursday morning

Frankly, I think the Obama administration was at the front of multiple political scandals during the 8-year run.

Source: Obama administration against Trump might be ‘worse than Watergate’ It’s been more than 8 years since Obama told ‘Joe the Plumber’ that it’s time to spread the wealth.   We most recently having him paling around with his extended chum team in Cuba and Argentina exclaiming that Communism is good for the soul.   Of course, Obama recently remarked for the world press: “There’s Little Difference Between Communism and Capitalism” [the President of the United States exclaiming that Communism is good !?!].    In case you’ve missed it, here are some of his famous quotes over the last 8 years about Islam and Christianity:

I don’t know about the rest of my fellow citizens, but I’ll be very happy when we get someone with a little different perspective on these topics traipsing around the White House…

That’s why they call him the Manchurian Marxist Moslem

Under the guise of Obama’s Utopia, our president has been plotting for years the ultimate wealth redistribution here in America. It’s Marxist social and demographic engineering on a breathtaking scale. I believe this is the most insidious thing he has planned for us and it is a killer.

The Manchurian Marxist Moslem… with a Messiah Complex:

If there’s one thing we can count on from President Obama at the White House Correspondents’ Association dinner every year, it’s him making jokes about being Muslim, foreign-born and socialist.On Saturday, he joked about how busy he is, dealing with immigration, vetoes and Iran — all while finding time to pray five times a day. And then there was the one about how if Bernie Sanders became president, we’d have a “third Obama term after all” (“Apparently, some folks really want to see a pot-smoking socialist in the White House,” he said).

Source: Did you hear the one about the Muslim, socialist, Kenyan president? – The Washington Post

First you should recall the famous quote from the noted Communist, Vladimir Lenin:

“The Capitalists will sell us the rope with which we will hang them.”

This was Lenin’s way of saying that the freedoms of Capitalism are its likely downfall…   We are living with this situation now.

Forget all the commentary you’re reading about Obama and his lack of knowledge, experience, leadership, etc.    All of that is true, but it doesn’t really matter.  He is having a monumental impact on the United States of America (note that I did not say positive impact).  He is helping to fulfill Lenin’s prophecy… Years from now people will recognize that the ultimate legacy he left the world was the subjugation of Capitalism from within.  With his focus on socializing medicine, introducing ambiguity into immigration, stymieing economic growth, and so on, he will have crippled the bastion of Capitalism in ways far more damaging that the cold war could have ever accomplished.

For some, the Manchurian Marxist Moslem will be successful beyond imagination.

It’s interesting that some people are raising a flak about the Manchurian Marxist Moslem now — see Obama: “A New Vision Of An America In Which Prosperity Is Shared”.     All I can say is: Where the heck were you folks in 2008 when Obama told Joe the Plumber – “we need to spread the wealth’?

Are his latest policy positions really a surprise to you?

If you’re a regular reader of this blog, you know that I consider Obama to be a stealthy Marxist and Moslem.   His behavior over the last few years bears this out… 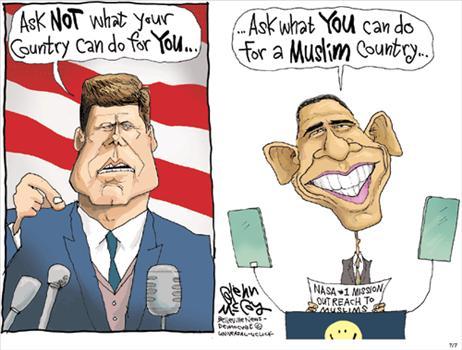 I stand by my position on this man as the Manchurian Marxist Moslem.   Over the last 18 months,  Obama has exhibited a consistent and strong affinity for these three characteristics.

In the future, we will cease using the phrase “Orwellian” and start describing deceitful, US-hating politicians, or politicians with convoluted logic as “Obama-like”.