I don’t know about those fair-weathered fans in Oakwood, but Bear and I are very proud of the Dayton Flyers after their 77-71 victory at Illinois….  A few quick observations: 1) the Flyers look great with the black road uniforms.  These look much better than those “santa clause” all-red uniforms (this has to be one reason for the road winning streak). 2) the Flyers dominated play for 38 minutes and looked like a top 10 team… until they played soft and shot 50% from the free throw line at the end of the game. 3) Even the ESPN announcers were impressed with the Flyers up-tempo transition game.  Unfortunately, even mediocre teams can hold down Dayton by playing zone defense (Illinois wasn’t bright enough or capable enough to force the Flyers into playing against a zone). 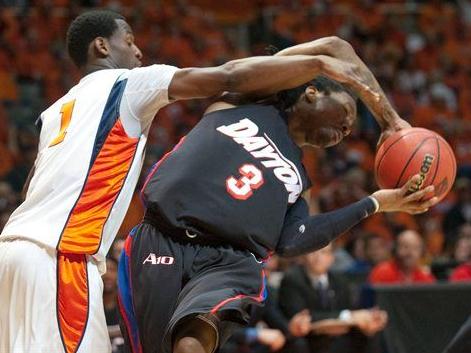