If you’re similar to the majority of the folks who read this lousy blog, you’re probably pleased with the prospect of dumping those Dimocrats out of office in November.  We’re tired of being told that we’re stupid Americans, and that we need that disc jockey in Washington and his cronies making decisions for us.  Obama and his gang are absolutely horrible on just about every subject: economics, foreign policy… you name it.

Well, the big question is: will the Repulslicans do any better?  Or will they behave similar to Bush “compassionate” conservatives?  In Ohio, we can’t wait to see the RINO, Voinovich, move his rear end back to Cleveland.  I’m assuming that Rob Portman will be much more representative of the tax paying citizens of Ohio.  However, how will they do on a composite basis?  Will they be brave enough to represent the principles espoused by our constitution?

With the emergence of the Tea Party, the decisions made by the Republicans will be scrutinized by both the Left and the Right.  A recent article in the Daily Beast highlights some of the likely issues. 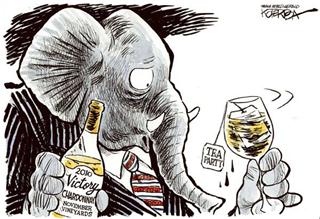 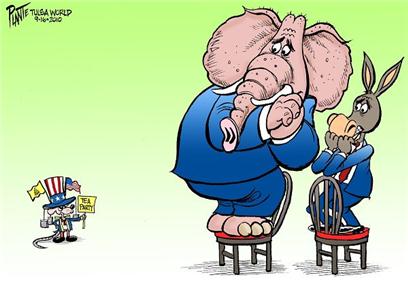 As the Wall Street Journal observed:

If voters give control of the House to the GOP, the party desperately needs to establish credibility on spending. Absent that, little else is possible. Independent voters now know that the national Democratic Party, hopelessly joined to the public-sector unions, will never stabilize public outlays.

Is the cartoon below the more accurate assessment? 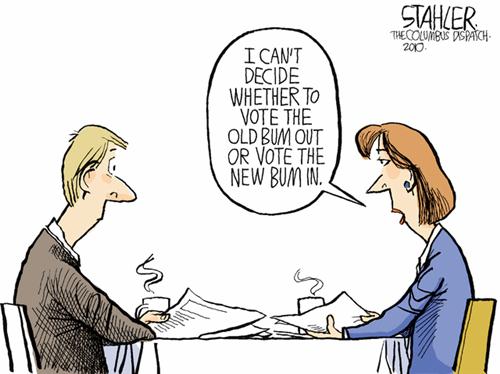