Well, here we are again.  Another major election year and we have the informal polling of observing political signs posted in yards.  Obviously, since my observations are based on my drives in northwest Montgomery country and southwest Miami county in Ohio, this is not a scientific polling.

Nevertheless, in my neck of the woods, it’s easily 10-to-1 in favor of Trump; And that doesn’t include the people that have Trump flags, drain-the-swamp signs, and other exuberant paraphernalia in their yards.

It appears that I’m not the only one performing this informal polling.  A State Senator from Tennessee recently noted:

I took a drive through my district today and up through rural SE Kentucky. Leaves were gorgeous. Also, 56 Trump signs. 2 Hillary.

This past weekend I decided to take a 20-mile bicycle ride meandering around Montgomery County, Ohio to perform an informal survey of support for the presidential candidates…  I counted 35 signs for Trump and 3 for Hillary, so we’ll round it down to an even 10:1 ratio.

It’s important to note that this is in no way a scientific poll.  It reflects my sampling of front yards northwest of Dayton, Ohio near the I-75 to I-70 interchange (see below), which may be a anomalous pocket of a Trump majority.   In addition, it may just be that Trump supporters are much more vociferous in displaying supportive signs in their yards.

I can say that my informal polling in 2012 showed a 2:1 advantage for Romney yard signs, so a greater quantity of signs in suburban Ohio does not necessarily lead to a national victory.  The question becomes: what should we make of a 10:1 advantage of signs for Trump? 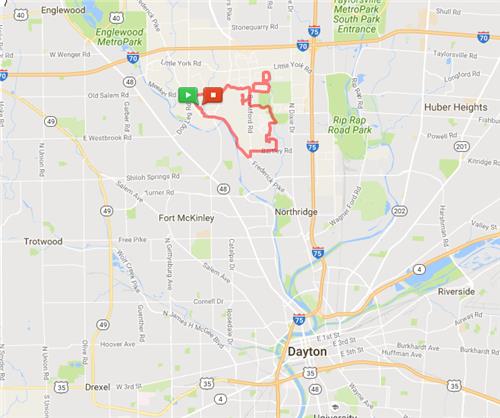 I noticed that a writer in the New York Times conducted a much broader version of my escapade.

Over the course of eight days, while traveling some 3,000 miles by motorcycle across the northern United States, I was steadily confronted by presidential yard signs.  I idly recorded those in support of Donald J. Trump until, after the first few days, the number approached 100. I eventually lost count.  Those in support of Hillary Clinton were comparatively easy to keep track of: I traveled nearly 2,500 miles before I saw a single one.  By the end of my trip, I’d spotted a whopping five.